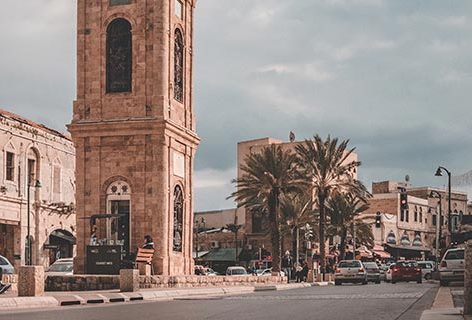 Owners of the Land is a five-part film series produced& directed by Rawan Damen.  Each part in the series is independent but connects to its predecessor.  This series is considered one of the first of its kind because it deals with the reality of the Palestinian Arabs living on the land that became known as “Israel”in world maps.  Before the British left Palestine and the Zionists announced the creation of the State of Israel on April 14, 1948, the British Mandate forces had completely allowed the Haganah and other Zionist forces to practice ethnic cleansing against the Palestinian Arabs.  Around one million, 80% of the Palestinians were pushed out of 80% of Palestine to the area that comprised 20 percent of what was left of the land, and towards Lebanon, Syria and Jordan and all over the world.  Some were displaced inside the area comprising 80 percent of Palestine and become known as the “internally displaced.”

By the end of 1948, there were only 160,000 Palestinians left in the land on which the state of Israel was announced.   Those Palestinians were later referred to as: “Arabs of Israel, the Arabs of 1948, Palestinians of the green line, the Palestinians of “al dakhel” (inside) and more.” They are, however, the people of that land; “Owners of the Land.”

This series sheds a light on Palestinians living in cities, towns and villages of Palestine in the areas inside the Green Line.  The series narrates their story in their own voice through historians, academics, activists and eyewitnesseswho lived the early years of the Nakba.  Their story is considered the foundation of the account of the Palestinian Nakba till today.  From those towns and villages began the displacement and ethnic cleansing of Palestinians by sea and by land.  This was also where the process began of settler colonialization and drafting legislationsthat govern those Palestinians with the intent of stifling them and ethnically cleansing themgradually to this day.

Arabs and even some Palestinians have always interacted very cautiously with the Palestinians that stayed in their homes and on their lands under the Zionist colonization.  This was due to many reasons.  First, it was due to a complete disconnection that took place between them that lasted two decades (1948 – 1967).  Second, because those Palestinians have carried Israeli passports.  Third was due to ignorance about the reality of their daily life in the Zionist entity.

This documentary unlocks a new way to view this issue from a factual verified point of view, not the one Israel promotes: that the Palestinians who remained in the Palestinian towns and villages of the coast, the triangle and the Nagevbecame Israelicitizens with equal rights.  We will, therefore, learn through these five documentaries details that relate to the life of Palestinians living in conditions imposed on them by Israel in Acre, Haifa, Jaffa, Lod, Shefa Amr, Arraba, Kafr Qasim and more.  Israel opposed and protested calling this series the Owners of the Land, because it shows clearly and truthfully that there are indeed owners of the land, and all the flags, military and settlements cannot deny this fact.

As we will see in its five parts, the Owners of the Land series works on building the intricacies of the story to place it in its true context.  For all the traditional descriptions that were used to describe the Palestinians who stayed in historic Palestine do not apply to them.  Because put simply: they are the owners of the land…they are of us and we of them.

Owners of the Land- Part One

Owners of the Land-Part two

Owners of the Land- Part three

Owners of the Land – Part Four

Owners of the Land- Part Five

Its better to jump